At 45 by 71 inches, the main-floor powder room is the smallest space in my home. Despite its tiny footprint, it sees a lot of traffic. A few years ago, I decided to give this heavily-used room the respect it deserves and to replace ancient fixtures, peeling, yolk-yellow paint, a tippy toilet, and a rickety window that let in drafts. The goal was to create a space that was pretty and practical. Because budget mattered, though, I wanted to enlist the minimum of outside help, and to balance splurges with cost-conscious choices.

The transformation began with a fresh coat of paint in a soft grey (Para’s Silver Fox). Next came picking a toilet. A water-efficient dual flush was an option, but I was wary, having heard rumours that such models can be hard to keep clean, and that they’re prone to odour. That is certainly not the case with the one-piece dual flush Lyndon model from American Standard’s DVX line I used. It’s since been updated with an American Standard 3.0 SpaLet toilet seat with an integrated bidet function  — more on that soon.

As with so many elements in my home, the old toilet was slightly off kilter. But while a splurge on a higher-end toilet seemed justified, I decided not to pay a plumber to move the drain pipe so that it could be centered against the back wall.

Instead, I made use of the lop-sidedness to squeeze in a slim linen closet that can hold a Costco-trip size load of toilet paper, along with toiletries, first-aid items, perfume and make-up.

The Man of the House (MOTH) was able to install the toilet within a few hours. Admittedly, he is a DIY genius of infinite brilliance, so it may take mere mortals a bit longer. He also did the SpaLet with minimal fuss.

Both the storage cabinet and a two-drawer floating cabinet (in a soft ivory colour, with a slightly textured finish) came from Cutler Kitchen and Bath’s Silhouette line. These are affordable, made-in-Canada pieces that can be found at several big boxes. Again, MOTH installed the units quickly and easily. A single-lever faucet (the Percy from the DVX collection) in polished chrome added a jewellry-like touch.

The search for a mirror to replace the utilitarian but ugly medicine cabinet reminded me that certain categories of home décor — lighting, throw pillows and, apparently, mirrors — often seem to have mystifyingly high price tags. Fortunately I found a mirror with a handsome hammered metal frame for under $100.

More money was saved by not replacing the lighting over the sink, which was serviceable if not stunning. Instead, I replaced the frumpy 1950-era ceiling light with a fixture with a delicate silver filigree pattern. Because I like to dim the lights for quests during dinner parties, MOTH put it on a dimmer switch.

If the toilet and faucet count as “because we’re worth it” splurges, a new window was a necessity. Cold drafts, condensation and lashings of noise from the street and neighbours had become truly irritating: personally, I like a little tranquility in the privy.

We opted for a model with laminated glass (good for security) and a good Sound Transmission Class, which refers to effectiveness in reducing sound. The Ply Gem window I used also has a low-E coating that helps keep the room comfortable in extreme temperatures.Once again, MOTH installed the unit with a minimum of fuss. (Friendly tip: DO check the weather forecast before removing an old window.)

Extra decoration was kept to a bare minimum, although I did resurrect and frame an old Sex Pistols poster because in my design world, every room benefits from just a touch of punk.

The entrance to the room, which is tucked rather awkwardly behind the main-floor laundry room can be closed off by a curtain in grey damask linen. The window is covered in a sturdy cotton ticking – also in grey.

Note to readers – I was supplied free product for this project by American Standard, Cutler and Para.

When the basement becomes a gigantic storage bin, it’s time for a redesign 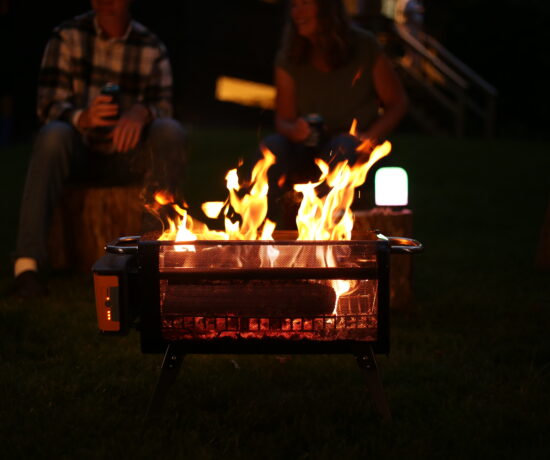 Everything you love about an outdoor firepit-without the smoke

Don't just lie there, do something! Link in bio a

A big round of applause for the ocean, which behav

Extremely fortunate to be present when @behrpaint

Had to take a moment to think about my father Karl

What a thrill to enjoy this panoramic sunset view