Like a boyfriend who’s extremely satisfactory in some ways but also has a few tiresome habits, the Cuisinart Mini Food Processor I’ve been testing all week had me on the fence about its long-term usefulness.  That’s not to say, though, that I’m anywhere near ready to break up. 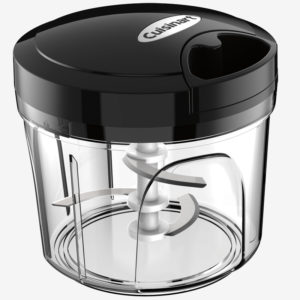 The mini food processor is a simple but very useful kitchen tool that doesn’t take up much space.

It works like this. Sitting inside a 2.5 cup dishwasher-safe plastic bowl is a removable spiral with three curved blades. It fits onto a little tip in the base, and the underside of the lid has a tip that connects to its top. When the lid is locked in place, the user pulls a cord attached to the blade, causing it to swing around and chop the food. It comes with an eeny-weeny spatula for scraping out food.

Suggested retail price is $50, but I found it for $27 recently at Bed Bath and Beyond.

I was initially prepared to be indifferent, as I frequently am with new gadgets (and tiresome men). But this one is actually kind of nifty.

It helped that I got the tester the same day I came into possession of a ten-pound bag of red onions ($2.50 at No Frills – how could I say no?) Faced with a two-foot pile of onions, my scathingly brilliant idea was to use the chopper to dice them before putting them into bags to freeze.

TIP: After filling the freezer bags,  I press them flat so they store more easily – thanks to Vijaya Selvaraju for teaching me that clever trick.

Very important to know is that the person who put on the first page of the instruction booklet the words, “CAUTION: THE CUTTING BLADE HAS VERY SHARP EDGES” was not fooling around.  Trust me, it’s indeed very sharp.

The machine did extremely well making nice, even dice out of onions that I had chopped roughly into quarters. I also used it to chop eggplant, tomato and zucchini for a ratatouille, and then combined pine nuts, pecans, cheese, toasted bread, and wheatgerm to make a topping for roasted Brussels sprouts. It was a real help for all those tasks, I will say, and it’s also useful to chop herbs for  fresh and flavourful vinaigrettes. It was also useful for chopping up peppers for a chicken soup.

It’s not recommended for denser nuts like almonds, or hard chocolate, and when I tried to grind fennel seeds I gave up after about 30 pulls, resorting to the reliable little grinder that Hamilton Beach gave me to test.

All in all, it’s pretty useful for something that takes up almost no counter space and is so easy to clean. In a short time, I’ve come to love it for chopping onion, something I do several times as week.

But here’s what I’m not crazy about. I find the mechanism around the blade is a bit temperamental. It won’t fit if there’s any food clogging either end of the wand, and a toothpick or something equally thin is needed to remove stuck food. Try to lock the lid when it’s not in place, and the cord simply won’t pull. That means you have to remove all the food inside to re-seat the wand. And food that’s too big or too dense can get stuck on the blade, and will need to be removed before it can be chopped (please see CAUTION, SHARP, etc. above.) 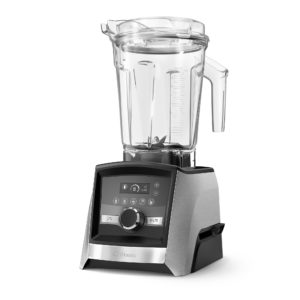 For a comparison, I chopped onion in a Vitamix (also a tester), thinking it could do larger quantities more quickly. It does, but I was reminded that a simple chop requires a light hand on the blender – go too fast or too long and the onion will get foamy and watery. To be fair, while I’ve never found cleaning my VM* anything but a breeze, it does use energy and make noise.

Bottom line, this product is simple, clever and useful. I’d love to see the few design challenges I experienced ironed out in the next iteration.

*More on new Vitamix product after I go to a preview this week. Stay tuned.

My dental health? In the pink, thx.